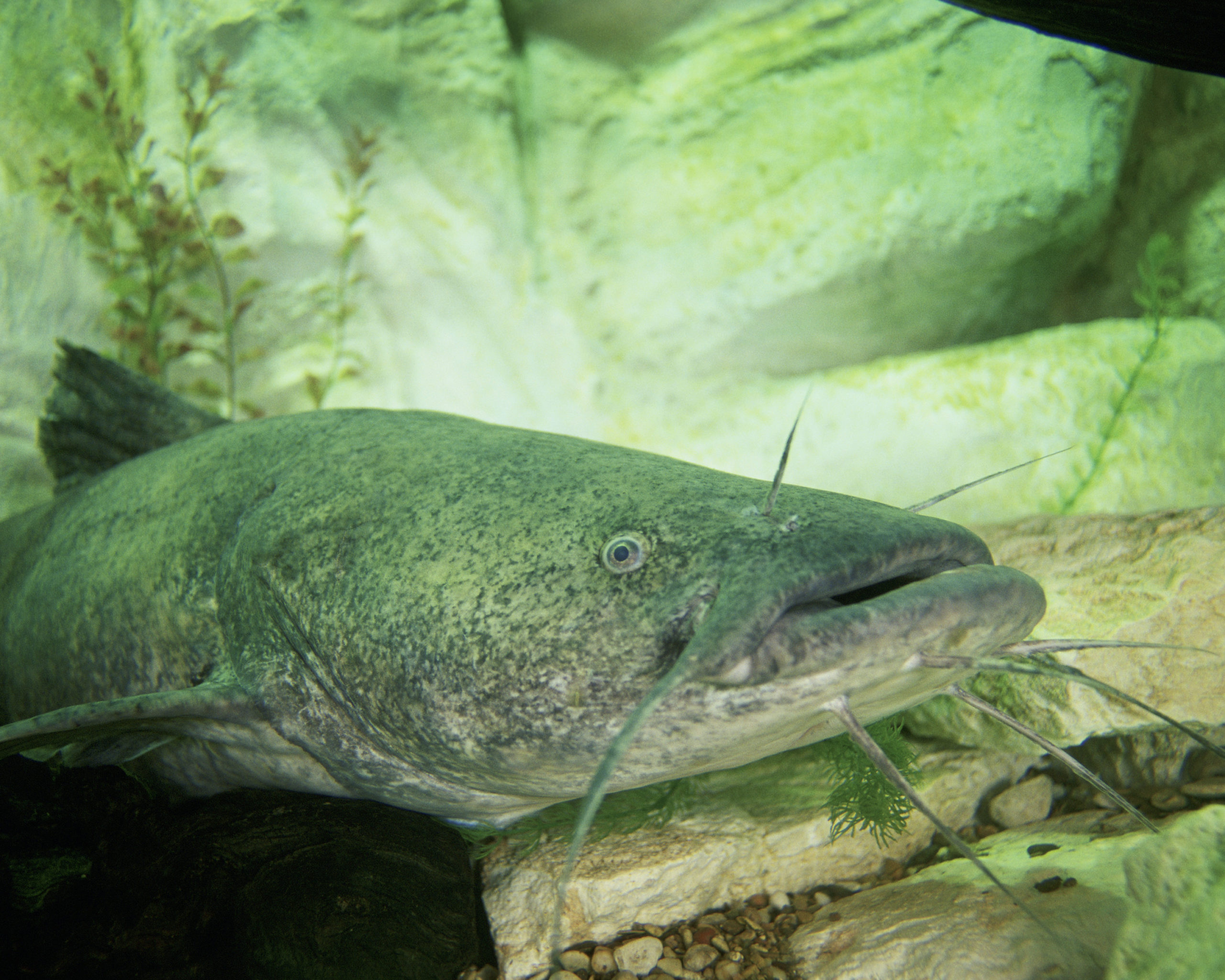 Although not thought of as usual fly fishing targets, Flathead Catfish can offer a freshwater fly angler the fight of a lifetime.

Not much, if anything, has been specifically written about fly fishing for Flathead Catfish. Primarily sought after by fisherman slinging heavy weights and large baitfish into deep pools, they are also incidentally caught by fisherman casting lures such as crankbaits and soft plastics. Rarely, are they ever caught by fly fisherman. Flatheads can grow to be very, very large in some waters. The world record is around 124 lbs! Most of them average 5-20 lbs with some over 40 lbs being common. They are most commonly caught in the Mississippi River and it’s tributaries, but they can be found almost anywhere. They prefer deep, slow pools with lots of cover. Also, they’re nocturnal. They frequent the pools during the day and come into the shallows at night to feed. Don’t get let this fact discourage you though. Flatheads are frequently caught in the day as well. They also frequent many lakes. In lakes, target the deep holes. With that being said, you’re going to need some sturdy fly fishing equipment to hook and land these beasts.

A nine ft, nine to 11 weight fly rod will be sufficient.

For reels, a large reel with a disc-drag and line capacity of at least 200 yards of 30lb test backing is needed.

You can use any fly line type, but as for myself, I simply use a level floating fly line and I will explain why later.

A floating line will handle many situations. The sheer size and weight of your flies will pull the line under and down to the depths. Sinking tip and full-sinking lines can also be used if you’re fishing in areas that have a faster current and you need your fly to sink faster.

Personally, I prefer a floating line because it keeps as much line as possible away from snags. Yes, it’s an issue that happens sometimes with this type of fishing. But, losing a few flies is nothing compared to snagging your expensive new fly line.

Using a strong leader is a must.

I recommend using anywhere from 17 lb test to 25 lb test leaders. You can either purchase commercial tapered leaders intended for saltwater use, tie your own tapered leader, or simply use a piece of level monofilament.

Leaders should be anywhere from seven to nine feet long. A strong tippet material is also a must. It must also be close to the same strength as your leader.

Flathead Catfish have a voracious appetite. They prey on large baitfish such as sunfish, shad, herring, suckers, carp and goldfish. Tie, or buy some flies that bear a close resemblance to these baitfish.

Another recommendation of mine, is that your flies are of the clouser type. Clousers ride hook point up leading to less snags on the bottom and in cover. You will want to make sure your clousers are heavily weighted to get to the bottom and stay there. If you tie your own, tie them on 2/0 to 8/0 circle hooks.

Next, use the biggest dumbbell weights you can fit on the hook. You want these bad boys heavy! If you choose not to tie, buy some larger clousers intended for bass, pike and saltwater applications. If the flies you have tied are not heavy enough, don’t be afraid to add as much weight as needed to get these flies to the bottom.

Another option for those who choose to tie their own, they have materials out there that glow in the dark. Try tying some up with that material sometime. The Flatheads seem to really like flies that glow. Especially when they’re out hunting in the low light hours.

How to cast a Flathead rig

Trying to cast the standard way will only result in snapped off flies and possibly a hook embedded in you somewhere. Instead, strip off the desired amount of line and cast it like a traditional fishing rig. Most likely, it will take a few casts to get used to it. Cast out to likely hiding spots and twitch the fly along the bottom.

Now, remember when I said I use a level fly line? This is why. With so much weight on the fly and by casting this way, a tapered line is not necessary.

Can you use a weight forward line or a double tapered line?

Of course! I just prefer a simple level line because I’m casting the rig, not the line. If you want to read up more on casting this way, I suggest looking up the chuck-and-duck method developed by fly fishers who target steelhead and salmon.

An unconventional method that works!

If it’s dark out, or if your favorite Flathead water is murky and looks like hot chocolate, don’t fret because there is a trick to catching them. Many of your fly fishing “purists” will shun you for this method, but you want to catch fish, right?

Take a nice piece of cutbait and put it on your fly. Flatheads have an amazing sense of smell and the smell of the cutbait will help them find your fly in the dark water. Many fly fisherman argue about this method, but it works.

You just have to think outside of the box. When fishing the cutbait method, crawl the fly on the bottom and bring it in slow, and I do mean slow. You didn’t hear this from me, but you can retrieve it so slow you could put your rod in a rod holder.

Fish on! Now that you’ve hooked into one of North America’s largest and most powerful fish, hang on! If you’ve never caught one on a fly rod before, imagine hooking your fly onto a diesel locomotive!

Once you’ve fought and landed the beast, grab him by the lower jaw and hoist him up for a quick picture, then release him back to the depths from where he came. Be sure to include your fly rod, or the fly in the picture because your buddies might think you’re telling another fish story! Tight lines!