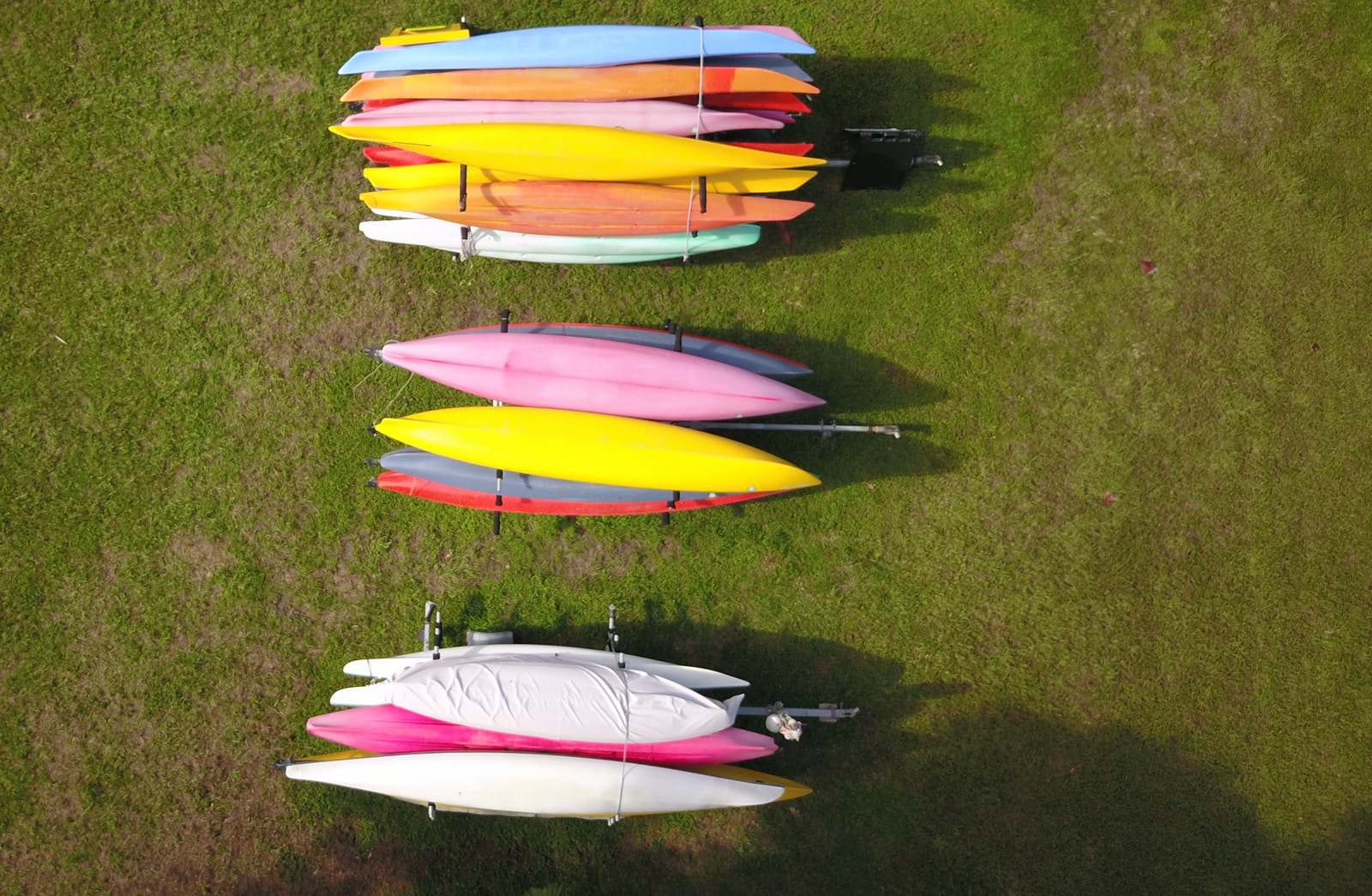 Kayaks are classified into two types. Sit-on-Top (SOT) kayaks and Sit-Inside (SI) kayaks are both available as singles or doubles. They are also available in hard shells and inflatables.

Although there are some significant distinctions between sit-inside and sit-on-top kayaks, they share many components. The deck is the top of the kayak. The hull is at the bottom. The bow is at the front, and the stern is at the back. Deck lines or bungees are frequently found on top of the deck.

There should be some grasp loops at the stern of the kayak, and some kayaks feature rudders. Foot pedals control the swiveling of the rudders in the horizontal plane. Skegs just drop straight into the water and assist the kayak in staying straight.

Seats and some type of foot support are provided in both sit-on-top and sit-inside kayaks, such as the foot wells in this sit-on-top kayak. There are also foot pedals that slide down the track to accommodate different sizes of paddlers. Foot wells are convenient, but if you’re going to be on the lake all day, you’ll want to utilize foot pedals. They’re a lot more comfy, and they provide a lot more support. The greatest kayaks will also include an integrated back rest, which makes sitting in a kayak much more comfortable.

The most significant distinction between the two types of kayaks is that sit-insides are enclosed. You sit in a section known as the cockpit. A cockpit rim around the cockpit allows you to connect a spray skirt to keep water out. Inside the cockpit, there is a seat and foot pedals that may be adjusted to fit your leg length.

Choosing a kayak can be difficult with so many options available, but it doesn’t have to be. And it’s difficult to make a bad choice. Identifying how and where you’ll be using your kayak is the greatest method to narrow down your selections.

Will you be paddling in a protected lake or on the beach?

Is the water going to be warm?

Are you searching for a kayak that can travel rapidly, or are you more concerned with having a kayak that is solid and difficult to flip over?
Your first and most important decision will be whether to go with a sit-on-top or a sit-inside kayak. And both have advantages and disadvantages.

Pros and Cons of Sit-on-Top

The most user-friendly are sit-on-tops. They’re quite stable, easy to get in and out of, and have no sense of confinement. They’re also self-bailing, which means they have small openings (known as “scupper holes”) that allow water to drain through them. Another advantage of sit-on-tops is that you can easily slip on and off of them. All of these characteristics make the sit-on-top kayak an excellent choice for nervous paddlers, warm locations, and paddling with children who enjoy swimming.

The disadvantage of sit-on-top kayaks is that you will almost certainly get wet when paddling, whereas sit-inside kayaks allow you to keep dry.

Pros and Cons of Sitting Inside

Sit-insides keep your lower body warm by shielding it from the wind. Sit-inside kayaks are ideal for paddlers who wish to stay dry while paddling in cooler water, and who see the kayak as more of a vehicle for travel than a toy.

One disadvantage of sit-inside kayaks is that you don’t have as much freedom in and out of the water. And if you do flip for any reason, recovery will be difficult because your kayak will most likely be full with water.

Recreational sit-inside kayaks, like sit-on-tops, are incredibly stable, entertaining, and simple to use. They have spacious cockpits, so there’s no reason to feel cramped inside. Some even have waterproof chambers accessible through deck hatches.

Once you’ve determined whether you want a sit-on-top or a sit-inside kayak, you’ll need to decide on the length. The longer and narrower the kayak, the faster it will travel, and the wider the kayak, the more stable but slower it will be. Because they are wide and extremely stable, most sit-on-top kayaks are classified as recreational (or “rec”) kayaks.

Sit-inside and sit-on-top kayaks are both stable. Because stability is mostly determined by the breadth of the kayak, two kayaks of similar width should have comparable stability. Of course, there are additional considerations.

The height of a kayak seat has a significant impact on stability, with seats set high above the waterline reducing stability and lower seats improving it. Seats in fishing kayaks are usually positioned higher off the water to allow for better casting. To have the same stability, they must be wider or fuller at the ends.

The term “fullness in the ends” refers to how far the width of the kayak is carried toward the bow and stern. When viewed from above, a boxy-shaped kayak is said to have fuller ends than a diamond-shaped kayak. From above, the more boxy the kayak seems, the more stable it will be at a given width.

Is a sit-in kayak more stable than a sit on kayak?

The most significant advantage of a sit-inside kayak is that it has a much lower center of gravity than a sit-on-top design, resulting in a much higher degree of secondary stability, allowing the paddler to lean the kayak on its side for more efficient turning and to remain upright when paddling in rough seas.

Is a sit-in or sit on Kayak better for beginners?

Touring or sea kayaks are longer and slimmer, making them much quicker. They also have thigh hooks or knee cups to give you more control over the kayak’s edges. The cockpits are significantly smaller. As a result, you may feel a little more confined, even though it is extremely easy to get out of these kayaks as well.

If speed isn’t crucial to you, opt for a shorter kayak; they’re lighter and easier to maneuver.

When most people talk about performance, they are referring to speed. As previously said, speed is primarily determined by how long and narrow a kayak is. Regardless of whether it is a sit-on-top or sit-inside design, a long, narrow kayak will be faster than a short, wide kayak.

Recreational kayaks that are only a few feet long are substantially slower. kayaks under 10 feet in length frequently feel like they’re pounding through the water. A kayak even a couple of feet longer will travel with considerably less effort, so if you’re looking for a flexible recreational kayak, start at about 12 feet.

Because of the way watercraft physics function, there is an upper limit to how much speed rises with length. When a design becomes too lengthy, the drag on the hull begins to offset the speed gain provided by the longer hull. Narrow racing or touring designs can be extremely long—18 or 19 feet—but that is usually the upper limit. A kayak significantly longer than this would have little advantage in terms of speed and would be more difficult to handle.

The fundamentals of kayak design are the similar for both sit-on-top and sit-inside kayaks, and you can get a good idea of how a kayak will perform by focusing on three primary factors: length, breadth, and rocker.

Most kayaks feature a robust shell composed of a long-lasting plastic that doesn’t require any maintenance. Kayaks built of composite materials such as fiberglass, carbon, and Kevlar are also available. They drastically reduce their weight. The disadvantage is that they do not tolerate abuse as well. They also tend to be much more expensive.

When all other factors are equal, a shorter kayak will be easier to turn than a longer kayak. Small recreational kayaks can turn extremely swiftly. Longer kayaks are quicker, but they turn more slowly.

More rocker makes a kayak simpler to maneuver while also slowing it down. Designers must balance the appropriate amount of rocker for each design based on its intended usage.

Wider kayaks are more stable, while narrower kayaks flow through the water more easily. Designs with broader ends have better stability but are slower than those with pointy ends. As previously stated, width and fullness must be balanced against seat height to achieve appropriate stability. Fishing sit-on-top kayaks with high seats are often wider and have fuller ends than leisure sit-inside kayaks with seats situated closer to the waterline.

If you’re going on an overnight camping trip or a long day paddle, you’ll need some equipment storage space in your kayak. The more space you have for stuff, the larger the kayak. Sit-on-top designs frequently offer an open space at the back of the kayak where a large dry bag may be strapped on. Many designs include a front hatch for internal storage of dry bags towards the bow.

Storage under the decks is possible with sit-inside designs. A rear bulkhead on many recreational kayaks creates a storage room that may be reached by a hatch in the back deck. Because the simplest designs omit this hatch and bulkhead, you must pack your dry bags into the hull from the cockpit. Many designs allow for a small drybag to be stored near the bow of the katak, beyond the footrests.

Bulkheads and hatches are located at the bow and stern of sit-in touring kayaks or sea kayaks. These bulkheads form storage rooms that can be crammed with camping supplies. If camping is a large part of your kayaking plans, these touring kayaks are the ideal alternative, despite feeling less stable than recreational sit-inside versions.

There are also inflatable kayaks, such as this one from Innova. They’re incredibly easy to paddle and can be deflated, rolled up, or folded down and carried in a bag. These kayaks are composed of coated textiles and are remarkably long-lasting. Inflatable kayaks aren’t as quick as hard-shell kayaks, but they’re a lot more versatile.

Is a sit on or sit-in kayak better?

When it comes to recreational kayaks, sit-on-top models are the superior option for paddling away from the beach, including on the ocean. They won’t fill up with water if you capsize, and they’re simple to get back on if you fall off. Large cockpits and limited floatation are common features of sit-inside recreational kayaks.

Can you use a sit-on-top kayak on a river?

How do you know what kind of kayak to buy?

The longer and narrower the kayak, the faster and straighter it will travel. A broader and shorter kayak is more stable and easier to turn, but it may lose speed. If you’re new to kayaking, a broader kayak can be a smart choice as you become used to being on the water.

Are sit-inside or sit-on-top kayaks better for fishing?

Because anglers frequently have a lot of gear that they need to store and reach easily, all fishing kayaks are sit-on-top types. On a SOK model, this is significantly easier.

Fishing kayaks are designed with several amenities that fishers will appreciate, such as integrated rod holders, numerous pockets for holding gear, and so on.

Which type is better for ocean kayaking?

If you go out into open water, you should think about what will happen if you flip over and can’t reach rapid help.

You have a choice between:

a sit-on-top variant with numerous bulkheads or a sit-inside touring kayak with multiple bulkheads.

Both are suitable for use in the ocean, but if you choose a touring SIK, you must are familiar with how to empty it and climb inside before travelling far from shore.