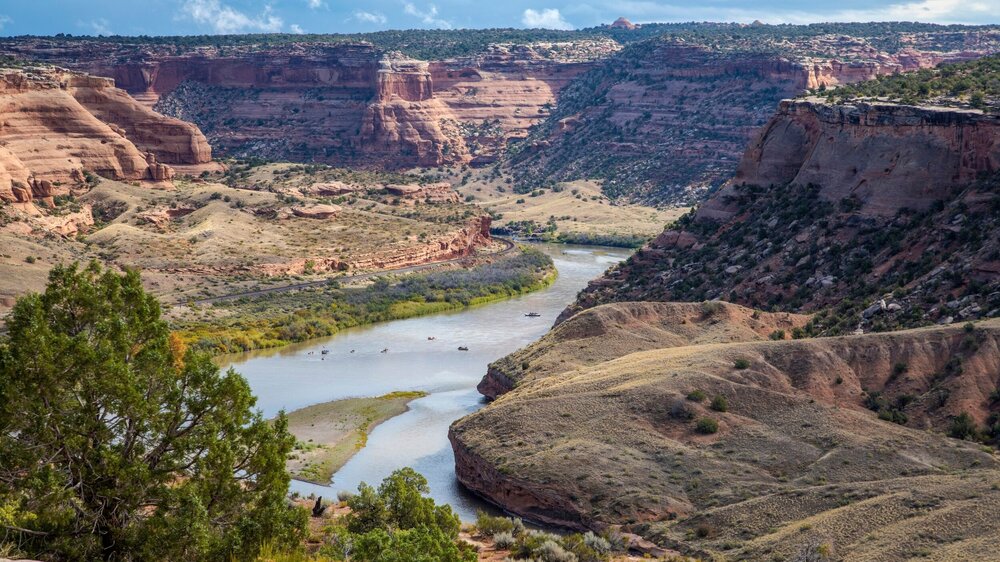 Located west of Grand Junction, Colorado, Ruby-Horsethief Canyon is a great trip down the Colorado River. There are only minor rapids on the trip so river enthusiasts of all ages and abilities can enjoy this float.

The river flows through beautiful canyons of desert sandstone and is filled with a variety of wildlife. In the spring, wildflowers also adorn the river banks.

Getting to the Ruby-Horsethief Canyon Put-in

From Grand Junction, Colorado, take I-70 west to the Loma exit, cross the highway and take a left at the BLM sign. Follow the road towards the river and pass a parking area on the left to a junction in the road.

Take the left fork down to the river; the right fork leads to private property, and it will quickly become obvious that this is not the right road if you happen to go this way. A steep hill leads down to the Colorado River and the moderate-sized beach that is the put-in.

Rafting Down the Colorado River Through Ruby-Horsethief Canyon

From the put-in, the river flows into some nice desert canyons after only a short distance and continues through desert canyons almost all of the way to the take-out. There are no named rapids on this section of the river but there is the occasional ripple here and there, so this trip can easily be made in canoes and inflatable kayaks as well as rafts.

Depending upon the time of year, water levels, and how much time you spend hiking, fishing, and camping, this trip can take anywhere from a few hours to a few days.

There are numerous camping sites along the way that require signing up for at the put-in but be prepared to share a site as this is a really popular trip on the weekends, and there isn’t always enough different sites for all of the people who want to camp.

Things to Do and See in Ruby-Horsethief Canyon

One of the most popular places in the canyon is the Black Rocks. Here the river flows through Pre-Cambrian rocks that date to almost two billion years old and is a favorite place for boaters to jump off of the rocks and go swimming.

Care should be taken in this section of the river at high water levels as the constriction of the canyon causes whirlpools to suddenly form, which can cause difficulties for boaters and potentially life-threatening situations for swimmers.

McDonald’s Canyon provides a nice short hike to some Native American Indian Pictographs in an alcove that can be seen from the river. Located at mile 17 from the put-in, this hike goes up from the river to the railroad tracks and then onto a trail on the other side that leads to the alcove and the pictographs.

The first pictographs are only about 1/4 of a mile up the trail, but there are more in the canyon if you wish to do a longer hike. Overall, Mcdonald’s Canyon is a four-mile round-trip hike.

A Longer Side Hike to Rattlesnake Arches

Near the start of the trip not far downriver from the put-in, is Rattlesnake Canyon and the trail to Rattlesnake Arches. The Rattlesnake Arches area contains one of the largest concentrations of natural rock arches outside of Arches National Park and is definitely worth seeing.

However, it is a long, steep ascent from the river to the arches and may be difficult to do in one day except for the hardiest of hikers. It is not recommended to attempt this hike during the summer due to high temperatures and the strenuous nature of the hike.

There is also a small petroglyph panel located not far from the river, and is worth the time for the short hike to the panel.

The canyon contains an interesting variety of sandstone layers and formations. Wingate and Entrada sandstone formations are visible as one floats downriver as well as the Rattlesnake and the Black Rocks Monoclines and the Bull Canyon Canyon Fault.

Bald Eagles, Blue Herons, and Turkey Vultures are a common sites, and as a result, several riverbank areas are closed to camping so as to not disturb bird nesting grounds. Desert Big Horn Sheep and Mule Deer may also be seen in the canyon.

Take-out for the Ruby-Horsethief Canyon trip on the Colorado River is at Westwater, Utah, located approximately 25 miles downstream from the put-in. Permits from the BLM are required to float past the take-out, and the river gets considerably more difficult with Class III and IV rapids downstream.

Ruby-Horsethief Canyon provides the river enthusiast a fun float trip through some beautiful desert canyons. There are several side hikes, pictographs and petroglyphs, and camping sites that are available at many locations along the river for a float trip on the Colorado River that can be done in a day or as an extended trip.