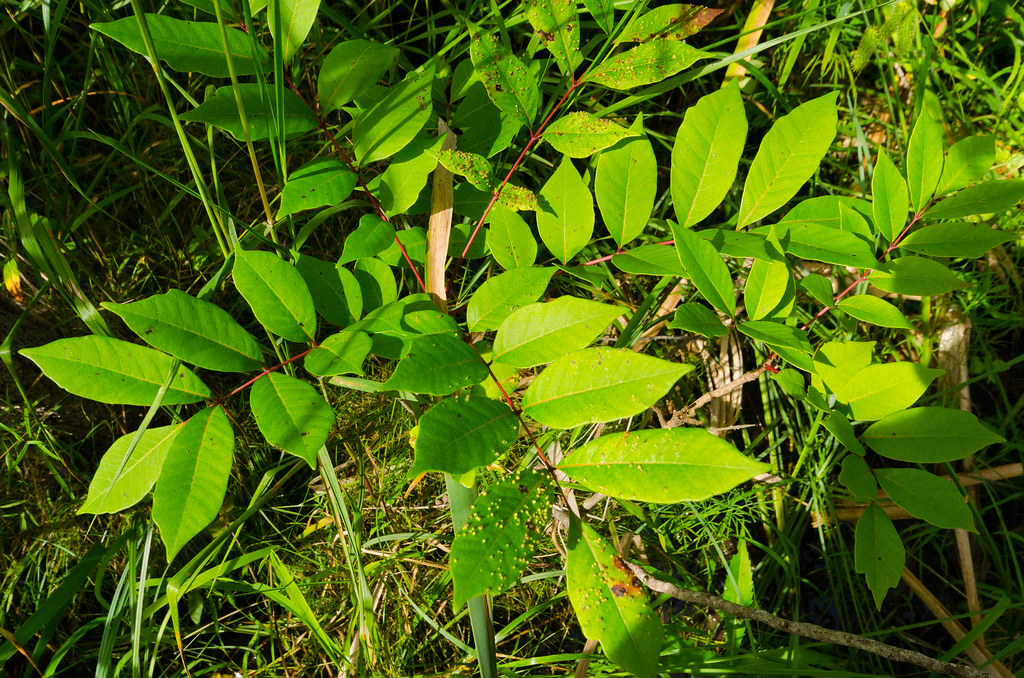 Poison ivy, oak, and sumac contain an oil called urushiol which is readily absorbed through the skin and elicits dermatitis.

Poison ivy, oak, and sumac are extremely common sources of dermatitis rashes that affect people from every age group, although sensitivity can decrease with age. The reason for this is its ability to elicit an allergic reaction in the skin, which is caused by the oily resin urushiol.

Armstrong and Epstein state that it only takes 50 micrograms of urushiol to cause a reaction in most people. This is about the same amount as a grain of salt.

The term “poison ivy” was first uttered by John Smith in 1609, whereas poison oak was first discovered by David Douglas (1799-1834) on Vancouver Island. (The Douglas fir is also named for him.) Poison ivy, in both the Western and Eastern varieties, is found in Canada, the West (except California), and the east.

Poison sumac appears to be from Texas to Minnesota to the Atlantic Ocean in the eastern part of the United States.

There are many myths associated with these plants. One such myth is that rubbing the rash will spread the rash to another part of your body or someone else. The rash will spread only if urushiol oil, the resin that causes the rash, has been left on your hands.

Another myth is that simply being close to the plants will cause a rash. However, only direct contact with urushiol will produce the rash or contact dermatitis. And most people, about 90%, are allergic to urushiol.

The most important factor to remember is to avoid being near burning poison ivy or poison oak.

Poison ivy (Toxicodendron radicans) contains clusters of three distinct leaflets, with the middle leaflet slightly longer than the other two. Typically these leaflets are 2-4 inches long.

The leaflets are not connected at the same point on the plant but alternate at their connection point. Poison ivy usually forms as a vine but can also be found as a bush. In the spring, the leaflets obtain a red coloration, turning to shiny green, and then yellow, red, or orange in the fall.

Small green flowers grow in bunches at the stem near the leaflets. White drupes (drupes having only one seed while berries have multiple seeds) form in clusters later in the season.

Poison oak (Toxicodendron diversilobum in the western U.S. and Toxicodendron quercifolium in the eastern U.S.) is typically a non-climbing shrub or vine containing 3 leaflet clusters with toothed or lobed edges. During early spring, the leaflets are green to light red, change to a glossy green in the summer, and then orange or red later in the year.

During the spring, small white-green flowers can be found where the leaflets attach to the stem. Whitish green round drupes form during the late summer.

Poison sumac (Toxicodendron vernix) is typically found in swampy regions. The leaflets are clustered in 7-13 leaflets and are arranged in alternating pairs with a single leaflet at the end.

The drupes produced are white in the fall and hang down from the tree. Non-poisonous sumac trees have red drupes that grow upwards from the tree and are found in soils that are not water drenched.

Poison ivy, poison oak, and poison sumac are all caused by a single factor: urushiol oil. Coming into contact with the leaves, stems, roots, or berries can cause a mild to a serious reaction. Urushiol oil can also be spread by touching clothes or pets that have touched the plants.

It’s actually the oil from the hands that spread the rash, not the open blisters. Therefore, it is extremely important to wash any area that has come in contact with these plants as soon as possible to remove the oil. The oil can remain fully effective even after five years, even on a dead plant.

Poison ivy vines or shrubs are more commonly found east of the Rocky Mountains. The hallmark indicator of the poison ivy vine is that the leaves are clustered in groups of three.

Poison oak is found west of the Rocky Mountains in small shrubs, and its leaves are smooth-edged, clustered in groups of three, five, or seven.

Poison sumac grows as a small tree that is generally encountered in wet areas of the Southeastern portion of the country. It can have seven to 13 leaflets. Poison sumac is said to be more virulent than that poison ivy or poison oak. Many botanists believe this is the most toxic plant in the United States.

All three types of poison ivy, poison oak, and poison sumac can be cured with several remedies, but the first and most important is to rinse with water. Approximately 15 percent of the population are extremely allergic to these plants and will be sensitive enough to break out into a rash within four to 12 hours as opposed to the normal 24 to 48 hours.

Swollen eyes and widespread, fluid-filled blisters on the skin are indicators that one needs to seek help immediately. Corticosteroids are often given as a course of treatment.

There is a myriad of over-the-counter remedies that work well for poison oak, ivy, and sumac, including Calamine lotion, Dermacool, Super Ivy Dry, and Burt’s Bees Poison Ivy Soap.

Many people prefer to use natural treatments, such as tea tree oil, jewelweed spray, and aloe vera, as part of their healing regime. Everyone has a different reaction to these poisonous plants, so healing the rash will vary as well.

Keep in mind that although you may feel that you are immune, repeated exposure can cause a later outbreak.

Urushiol is not a single chemical but is a common name for a mixture of compounds containing a catechol substituted with an alkyl side chain. In the case of poison ivy, poison oak, and poison sumac, these side chains are 15, 17, and 13 carbons long, respectively.

Longer side chains and higher degrees of unsaturation result in more reactive urushiols. These catechols can penetrate the skin and bind to cell membranes initiating an immune response.

The Spread of Urushiol

Urushiol is contained only within the resin canals of plants. Contrary to popular thought, it is not actually secreted by the plant. This means that casual contact will not cause an allergic reaction unless the plant is damaged and the urushiol is exposed.

Even small breakages of the plant can expose the urushiol contained within, so even though it doesn’t look crushed, there may be an exposure hazard.

Urushiol samples aged over 100 years have been known to elicit an allergic response and can easily penetrate the skin. Scratching and rubbing an area containing urushiol spreads the oil and expands the contamination.

A simple test to determine if a plant contains urushiol is to crush a leaf between a sheet of white paper. The urushiol in the plant will darken due to oxidation after 10 minutes.

The most common reaction is redness and swelling of the skin, accompanied by itching and extreme discomfort. Blistering may also occur. These blisters do not contain urushiol and thus do not lead to new infection sites.

These reactions can occur after a few hours or even take days to manifest. Itching can last up to seven days, and dermatitis can last up to three weeks.

If urushiol droplets are inhaled (usually caused by burning), lung infection, fever, and throat swelling can occur. Ingesting poison ivy, oak, or sumac can result in irritation of the mucosa and digestive tract and result in gastrointestinal problems.

Poisonous plants cause contact dermatitis, and only one nanogram (billionth of a gram) is needed to cause a rash. The average that one receives when contacting these plants is about 100 nanograms.

The substance causing the contact dermatitis is urushiol, and only a quarter of an ounce is needed to cause the rash. The word “urushiol” comes from the Japanese “urushi,” the word for “lacquer,” as the sap of a poisonous tree is the source of lacquer.

Urushiol is so potent that a plant can be dead for up to five years, and still, the substance will be on the surface of any part of the plant.

These plants are the source of the most common allergy in the United States, producing contact dermatitis in about half of the population at any given time. While some people claim to be non-reactive to this poisonous group of foliage, the sensitivity can develop at any time in any person.

The reaction to the plant varies from person to person and can be severe in some. In some states such as California, reactions to poisonous plants are covered by Worker’s Compensation.

The most effective treatment is simply showering with water, which neutralizes the urushiol. Certain soaps may spread the infection by limiting the amount of water that reaches the urushiol and then spreading it over the skin.

The idea is to neutralize and remove as much of the urushiol from the skin as possible without causing further exposure. Products are available to reduce the swelling and itching caused by the allergic reaction. If ingestion occurs, including inhalation via burning, consult a physician immediately.

The allergic dermatitis rash that develops when the skin comes in contact with urushiol is intensely itchy and can last from one week to four weeks. The rash is clear or reddish and eventually blisters. Calamine lotion is frequently used to soothe the itching, but more dermatologists are now recommending oatmeal baths or baking soda baths as a relief.

For extreme allergic reactions, corticosteroids are prescribed to clear up the outbreak. The fluids released from the rash do not spread the rash on the body; only areas that have direct contact with the urushiol will break out.

All clothes and tools that have touched the poison ivy, poison oak, and poison sumac should be washed thoroughly with detergent and water. Urishiol can remain active for years. People who have been exposed should wash with soap and water thoroughly as soon as possible.

Getting rid of the bothersome plants is not easy. Clothes and gloves must be worn any time one is near the poison plants. Even the vines are poisonous. Some people have had success spraying with Roundup or Brush-B-Gone. It usually takes repeated applications.

The vines can be cut, and the plants cleared out. Under no circumstances should these plants be burned. Breathing the smoke into the lungs can cause a rash to form in the lungs and can lead to fatal respiratory distress.