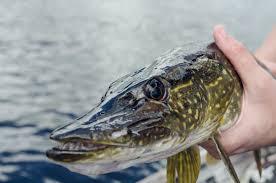 Northern pike (Esox lucius) are long-bodied carnivorous fish that are found in North America, Europe, and Asia. They are shaped like barracuda, though the two types of fish are not closely related.

In the Northern U.S. and Canada, fishing for these voracious predators is a prime recreation, particularly in large lakes. Following are some northern pike fishing tips that can increase success.

Using surface lures is a great way to entice aggressive pike in summer. In waters without too much grass or algae, floating crankbaits or poppers may be used with great success. In grassy waters or those with lily pads, weedless surface baits, such as scum frogs, are very productive.

As topwater baits make commotions that pike are not likely to ignore, use them whenever possible in shallow, near-shore waters. Steadily reel crankbaits, and pop poppers with force to push water and attract fish.

When using scum frogs, slide them across the surface with slow reeling and rod twitches through grasses and lily pads where frogs are often seen.

Rattle traps (Rat-l-Traps), large deep running baits, can be dynamite for northern pike in deeper areas. To fish, these, cast out and steadily reel them as they are down, low in the water column.

Brightly-colored baits, which are not recommended for bass, can be great for northern pike fishing. Red, yellow, and chartreuse rattle traps are some of the best lures for deeper waters that are void of algae and grass, so be sure to have some of them in the tackle box.

Northern Pike Fishing Tip #3: Use Large Spinners on the Edges of Shallows

Steadily reeling large rooster tail spinners with gold or silver blades and treble hooks along the edges of shallows and around drop-offs can be very successful in lakes during the warmer months.

Cast parallel to the shore, either from a boat or from the water (wading), and reel steadily, with no rod twitches or jigging to keep the spinner swimming straight. Try to reel at a medium pace, as when fish miss, they can come back again to attempt to swallow up the lure.

Spinners with bright red, orange, or yellow feathers, which stand out in the water, are great for pike, which are not startled by bright baits.

Swimbaits, which resemble smaller fish, are large lures that have great motion when reeled steadily. Swimbaits that look like bream or shad can be great for northern pike fishing in medium-depth areas not too far from the shore.

Try reeling these through cuts and trenches or along the edges of the shallows. It may be necessary to cast several times to the same spots to fully comb prime fishing areas.

Northern pike fishing is a popular outdoor activity in much of the Northern United States and Canada. Try employing some of the above angling techniques to maximize productivity.