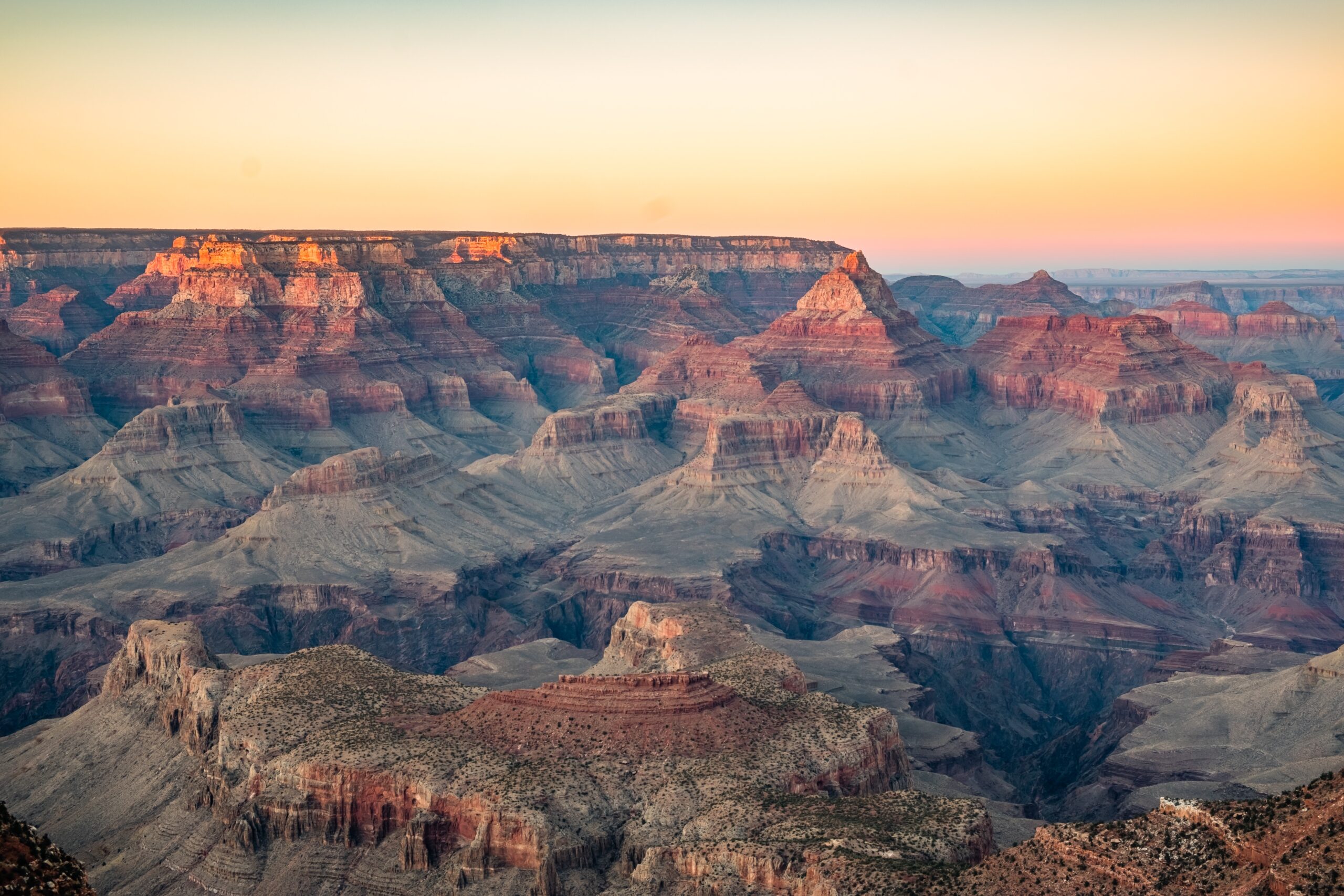 This strenuous 6.8-mile trail drops 4,780 feet and comprises the first half of the South Kaibab to Bright Angel Loop departing from the Grand Canyon’s south rim. Along the way, hikers descend through ever-changing layers of geologic history and desert scrub brush and eventually follow the banks of the Colorado River.

Selecting the South Kaibab Trail to Hike into the Grand Canyon

The South Kaibab Trail is one of fifteen hiking trails located within the 1,904 sq. miles of Grand Canyon National Park, a World Heritage Site, that provide access to the canyon floor. Overnight hikers attempting a rim-to-rim or loop hike, entering and exiting the canyon using different trails, often choose to hike down the South Kaibab Trail.

Although over two miles shorter than the Bright Angel trail, South Kaibab’s consistent steep incline and lack of water facilities make for a much more difficult, if not dangerous, hike out of the canyon.

Backpackers attempting to hike to the base of the canyon will want to depart as early as possible, maximizing the cooling effect of the morning before the sun heats up the canyon walls and depletes the already limited shade along the trail. Early departures are particularly essential in the summer months.

Descending from the South Rim on the South Kaibab Trail

The South Kaibab trailhead is located at Yaki Point, off Desert View Drive. The hike begins on a series of maintained dirt switchbacks in the shadow of Yaki Point Overlook before opening up to the first panoramic view 0.9 miles down at Ooh Ah Point.

Motivated backpackers will want to push on another half-mile to Cedar Ridge, a wide flat area 1000 feet below the ridge line, and arrive before dawn to watch as the sun rises over the cliffs in the east.

The trail then traverses the ridge-line towards O’Neill Butte and settles into a gradually declining slope down to Skeleton Point, where hikers can pause for their first view of the Colorado River.

From here, the trail turns into a series of steep, sharp switchbacks headed down towards the Tonto Plateau before eventually leveling out along the rim of the inner canyon gorge.

The final portion of the trail descends past the “Great Unconformity,” a gap in the geologic record, before entering the dark inner gorge characterized by Vishnu Schist. Metal signs posted trail-side announce the changes in rock layers as hikers descend.

The South Kaibab Trail provides magnificent panoramas and scenery as it descends from the Grand Canyon’s South Rim. However, due to the lack of available water and shade, hikers should be well equipped and carry plenty of water before making a descent.

Prospective backcountry hikers will find the information provided in the Grand Canyon Backcountry Trip Planner invaluable in planning a hike inside the Grand Canyon. This annual pamphlet is freely available to the public from the U.S Department of the Interior National Park Service.