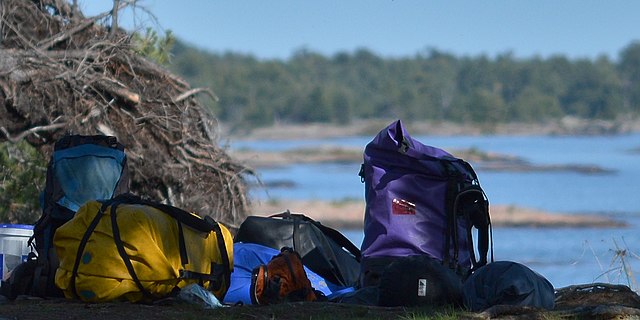 Sleeping pads are an important part of a backpacker’s sleeping system. They provide padding against the ground and a barrier to insulate the body from losing heat. However, there are other creative uses for a sleeping pad as well.

Using a Sleeping Pad as a Camp Chair

Want to shed some ounces from the pack weight, but don’t want to sacrifice comfort while sitting around in camp? A sleeping pad can be used to make an improvised backpacking camp chair.

A closed-cell foam pad can be folded onto itself and made into a sitting pad. Or, it can be draped over a rock or log for a padded backrest.

It is better to use a foam pad instead of an inflatable pad, as the inflatable pad could get punctured and deflate. However, companies like Therm-a-Rest make sleeves that can convert a pad into a camp chair.

Sleeping pads have several uses in emergency situations. Their primary use is that a patient can lie on them, helping to make the patient more comfortable. They can also be used as splinting material to immobilize an arm or leg.

They can even be made into a collar to immobilize the neck. These are skills that can be learned in a wilderness first responder course.

Using a Sleeping Pad to Teach

Have a backpacking job and teach others outdoors? A sleeping pad can make a great easel for presentations. Simply fold the pad over on itself and stuff it into a white trash bag. Use dry-erase markers to create outlines or diagrams.

Or, draw directly on the pad. It will save carrying the trash bag, but the pad will permanently have whatever is written on it.

Using a Sleeping Pad to Fan a Fire

A sleeping pad can also be used to fan a campfire. Just fold the pad over on itself, hold it stiffly, and fan the flames. Be careful, though, as sparks could land on the pad and burn a hole into it.

Use a closed-cell foam pad that you don’t mind getting small burn holes in, as the pad will still work, as opposed to an inflatable pad.

Using a Sleeping Pad as a Windbreak

Need to protect a camp stove or lantern from the wind in order to light the flame? Just like backcountry camp chairs, sleeping pads can provide some protection from high wings.

Have a second person hold the sleeping pad around the stove or lantern to protect it from the high winds while you light the device. Watch out for any flames that may come out, and possibly singe the pad. This same technique can be used to light a campfire as well.

When in the backcountry, hikers, and backpackers can be creative with the gear they have in order to accomplish tasks.