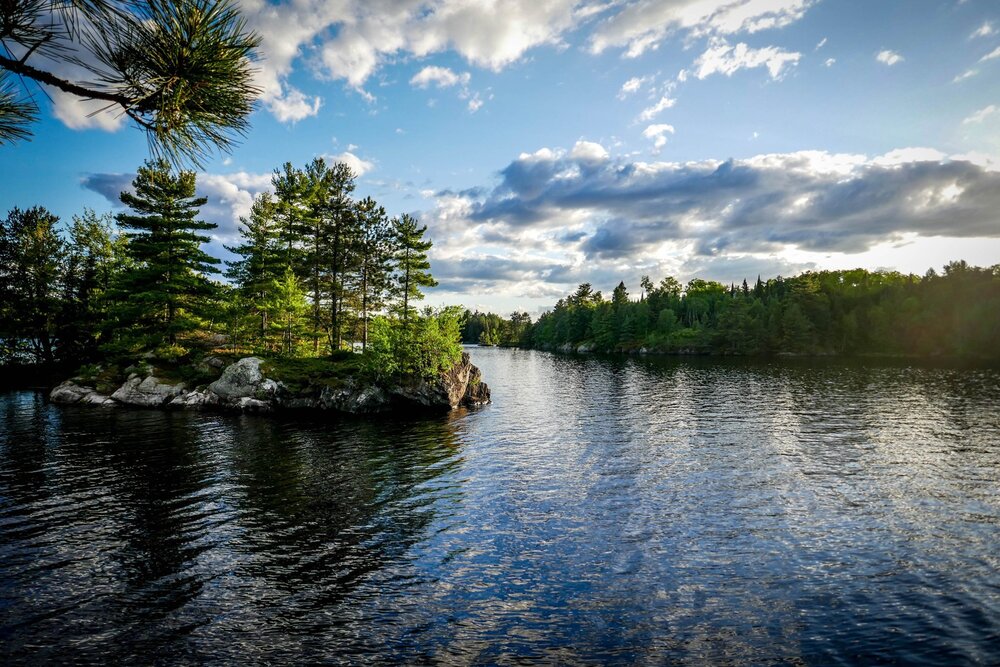 Before the American Revolution, French-Canadian trappers and fur traders traveled a waterway that connected the Great Lakes to the American west. These “voyageurs” paddled birch bark canoes along what is now part of the Minnesota-Ontario border.

Today, Voyageurs National Park exists along that route and preserves this pristine area in much the same condition known by those early outdoorsmen.

Visitors to Voyageurs National Park are able to take a step back in time. Canoe and kayak are popular modes of transportation, just as they were more than 200 years ago. Water dominates this park, and many lakes are connected by the Rainy River.

When planning a trip to Voyageurs National Park, the Minnesota towns of International Falls and Kabetogama are good places to start. Each offers one or more vacation resorts, and area outfitters can help provide any camping or fishing equipment that might be needed.

In the summertime, it is possible to rent a canoe, throw in some camping and fishing gear, and disappear. There’s a vast amount of water to explore and many bays and secluded inlets, so it is easy to leave the cares of the world behind. Days can go by without seeing another human.

People can be in short supply in the park, but wildlife is right at home here. Eagles, bears, wolves, and an occasional moose enjoy the solitude of this wilderness area. It is advisable to check with local outfitters as to the possibility of meeting some of the animals. Nobody wants to feed the bears.

Much like the waters of other Minnesota lakes, such as Mille Lacs, Voyageurs National Park is home to some of the most popular freshwater fish in the world. Among others, these waters contain:

Due in part to the isolated location of these waters, there’s less fishing pressure than on other lakes. Some of the more isolated areas of the park might not see a hook hit the water all year. This is another reason that a fishing trip to Voyageur National Park can be so memorable.

Vacations to a Minnesota Winter Wonderland

Winter comes early in these parts, but that’s no reason to stay indoors. When the water freezes, the lakes become snowmobile countries. Cross-country skiing is another way to get around during the winter, and those skis or snowmobiles can get ice fishermen to their favorite spot in a hurry.

Northern Pike fishing through the ice provides an entirely different kind of thrill than in open water, but these toothy fish are just as hungry in the winter.

The waterway that the early voyageurs traveled took a fairly direct route from Lake Superior to Lake of the Woods and was so well established that when a 1783 treaty ended the American Revolution, it determined that the boundary between the US and Canada should follow this customary waterway.

If only all border disputes could be handled so easily.